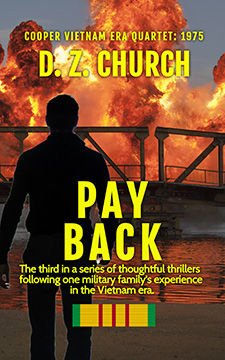 Pay Back is the third novel in the Cooper Quartet, the story of a military family set against the tumult of the Vietnam Era.

It is April 1975. The U.S. has withdrawn leaving only a few Marines to protect the U.S. Embassy and Airbase HQ. As the North Vietnamese close in on Saigon, journalists stay on to report the advance, South Vietnamese beg to leave, and the U.S. is ready to forget—but not the Coopers.

Two acquaintances from opposite worlds call in their markers, sending Laury Cooper careening back to Saigon on a knight’s errand. Disgraced, CDR Byron Cooper is given one last chance aboard an aircraft carrier in the South China Sea. As Saigon falls, both brothers face their future, a future endangered by greed, desire, treachery, and drugs.

One of them will risk everything, including his wife and children, to win.

Pay Back is published by BodieBlue Books and is available on Amazon.

“Church skillfully draws readers into her meticulously researched and fast-paced tale with skillful worldbuilding that allows readers to practically smell the gunpowder as dangerous battles rage. Her able plotting will encourage readers to overlook the occasional small error. The author also does a masterful job of exploring moral shades of gray in her characters, avoiding making any of them one-dimensional and encouraging readers to examine their own beliefs about right and wrong.

“This novel can be appreciated as a standalone story, but readers will get more enjoyment from reading the whole quartet in order, as several subplots are continued from the first two installments and the suspenseful ending suggests more intrigue to come. Ideal for fans of wartime stories and sweeping family sagas, this taut tale delivers a heady mix of intrigue and history that will keep readers on the edges of their seats.

“Takeaway: This wartime thrill ride turns the waning days of the U.S.’s involvement in Vietnam into a pulse-pounding, smart tale of suspense.”

An excerpt from Pay Back:

Laury lugged Byron’s duffle bag down the steep stairs, Byron right behind him, his black briefcase in one hand, his uniform combination hat in the other. The hall light danced dark shadows down the stairs. Halfway down, Byron moved his combination hat to his right hand then reached for Laury’s left shoulder with the other. Laury rested the duffle one step down and faced his brother.

“That it ends this way?” Laury asked. “Part of me can’t believe we would leave the Vietnamese to the communists. That’s probably the Marine. The other part of me keeps thinking it’s about damn time we let them have their country back. In twenty years, we’ll be less of a memory than the French.” He cocked his head amazed at how the uniform brought out the cocky in his brother, how he wore it with the same grace Mac had. “Look, I don’t want anyone else to die for this thing.”

“I’ll be on a carrier. I’ll be giving briefings and giving media tours.”

Byron squeezed the back of Laury’s neck. Pulling away, he gazed at his brother, seeing what he had always seen, a smart, capable, goofy boy grown to an intelligent, adept, passionate man. “By the way, your Kate is pretty special.”

Laury reached for the duffle bag, saying, “I’m not ready to let you go. I’ve got the damnedest feeling about this.”

“Damned. As though the world will take one more heave to the left before the last plane or chopper leaves.”

“Wingman, listen to me.” Using Mac’s nickname for his brother caused an unexpected lump in Byron’s throat; he put his hands back on Laury’s shoulders. “You’ve got to let the ‘Nam go. I’ve heard what they say about you. I asked. Maybe what you’re feeling is this thing coming to an end, maybe it is just closure for something you can’t close out yourself.”

“You don’t feel it, Slick?” How could that be when the sense of it was so palpable to him?

“Robin would say that Teflon is a magical thing.”

“Bull, that’s just Navy aviator talk. The next thing you’ll say is war is my business and business is good. Screw that!”

Byron squeezed Laury’s shoulders. “Relax. I’ll be careful. You promise me you’ll get past this. You’ve got three great girls, a herd of people who love you and depend on you. You’ve got the world. Me—I may have one more chance.”

Laury picked up the duffle bag. “Don’t use the word chance.”

Byron shook both of Laury’s shoulders from the stair above. “No wonder Mac loved you best. We needed you, the two of us.” Byron plucked his hat from the stairs where it rested on his briefcase, put it on his head, and squared the eagle insignia to the line of his nose.

“Yeah, well, we all know how well that turned out, one dead, one disgraced.”