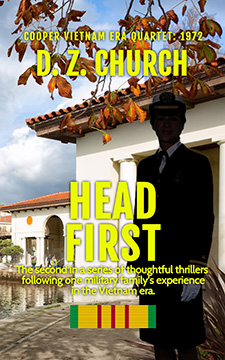 Head First is the second novel in the Cooper Quartet, the story of a military family set against the tumult of the Vietnam Era. It is December 1972, President Nixon has ordered carpet bombing of Vietnam, and public opinion has turned sharply against the war.

For Jolie Minotier the stakes couldn’t be higher, adrift in the town where her mother, terrorist Chloe Minotier, abandoned her, fearful her mother will resurface, rejected by her father, she does the one thing she can think to do—run. But she doesn’t anticipate being kidnapped or that her father, now CDR Byron Cooper, her uncle, Laury Cooper, or her aunt, LT Robin Haas, will care. But they do. Sufficiently to endanger their lives and careers in the rush to find her.

Jolie’s disappearance sets off a chain of events from kidnapping, to heroin smuggling, to unsanctioned insertion into Vietnam that will change the landscape of the Cooper family forever.

The Cooper Quartet begins with the novel Dead Legend.

Head First is published by BodieBlue Books and is available for purchase on Amazon in Kindle and paperback formats.

“As historical fiction, Head First is accurate; as a novel, it’s moving, intriguing and a successful portrait of a family living, trying to survive, during extremely trying times, under extraordinary circumstances.”
—Wanda Fischer, Reedsy Discovery

“This sequel continues the saga of the Coopers, a Navy family grappling with its pas against the backdrop of the Vietnam War… Church’s prose is precise and often subtly lyrical, asking readers to pause and sit with every scene… an intriguing family saga.”
—Kirkus Reviews

An excerpt from Head First:

LCDR Byron Cooper’s pregnant wife, teen daughter, Jolie, and small son have just moved into Naval housing at NAS Alameda, CA. LCDR Cooper is on an aircraft carrier on Yankee Station during Nixon’s Christmas Bombings. Jolie’s mother, Chloe Minotier, takes the opportunity to come for her daughter. But, as always, she has another agenda.

A small woman, her blonde hair cut in a shaggy pixie that fringed her blue eyes, walked across the stream of people leaving Customs at San Francisco International Airport to a large window overlooking the taxiways. Leaning on the casement, her back to the airfield, she scanned the waiting room. When a pair of appreciative eyes connected with hers, she pretended to check her manicure.

The carnelian polish on her fingernails matched the color of her hip-hugger bell-bottom pants. Black leather boots with stiletto heels took over at her feet. A white turtleneck under a leather vest finished the ensemble, serving to highlight her broad delicate shoulders and slender waist.

She studied the arriving travelers. A glimpse of a girl with curly red hair rushing to greet her boyfriend gave Chloe Minotier’s stomach a quick twist. To cover the emotion, she rummaged in a large handbag until she located a pack of unfiltered cigarettes and a lighter. After fumbling a bit to get the lighter to work, she lit a cigarette.

A tall man, his light brown hair cut long on top but neat over the ears and collar approached her. He put his right hand on her left shoulder then kissed her neck. She took a long pull on her cigarette, leaving a dark red lipstick stain. Flicking ashes to the floor, she said, in English accented by five years in the south of France, “You are late, n’est pas?”

“Mais oui, but you, Mademoiselle Minotier, are gorgeous. I take it you plan to hide in plain sight.”

“Mademoiselle Tonnelier.” Chloe took another pull on her cigarette. “Where is she, où est ma petite Jolie?”

“Officer’s housing at the Naval Air Station on Alameda.”

“Have you seen her?”

“No. But Cooper’s pregnant wife may have seen me.”

Chloe threw the butt of her cigarette to the floor grinding it into the linoleum with a sharp-toed boot. Her eyes on the activist she knew as Raven, she lit another cigarette. “When you speak of her to me, call her Joan. I never want to hear of Mrs. Cooper, the Commander’s wife, Cooper’s wife. Never. She is just Joan, pregnant or otherwise.”

She locked her blue eyes on his face until she was confident he understood.

“Did you have any trouble finding their home on the Base?”

“No. I thumbed a ride onto the Naval Air Station. We were waved through at the gate. Then I walked to officer country, as you call it, and used the address you sent me. By then it was dark, so I was able to do a little peeping. But I am sure that Joan either saw me or my shadow.” He did a little two-step.

“Where will we spend the night?”

“At your suggestion, I have rooms at a place called the Boatel in Oakland. You can see Alameda from the hotel room window. It is right at the foot of Broadway, the gateway to Oakland, Alameda, and Berkeley.”

“You are certain my daughter is with the pregnant Joan?”

“Yes, mademoiselle. We will be informed the moment Jolie contacts Carol Selkowicz. It wasn’t today, but it may be tomorrow. Things are in motion. When and wherever they meet, we will be ready. By the end of the day that Jolie makes that call, we will have her. I’m betting on the coffee shop on Telegraph. You remember the one, glass front, tables like an ice cream parlor and delicious muffins. The coffee wasn’t bad, either. We would meet there sometimes to talk about class assignments.”

Chloe nodded. “When you were my teaching assistant, and I was a professor of history. Oui, I remember this place.”

Raven put his hand on the small of Chloe’s back worming it up under her vest then guided her towards baggage claim. Chloe took a long pull on her cigarette, exhaled away from Raven’s face then smiled at him in such a way that he anticipated the night.

More about the Vietnam War