Not many wars have an icon, but if the Vietnam War has one, it’s the Bell UH-1 Iroquois, better known as the “Huey.” The revolutionary changes in warfare that it ushered in, combined with its signature “whop-whop-whop” sound and its appearance in hundreds of movies and television shows, make it the ubiquitous image of a helicopter.

Seeking a general-purpose helicopter which was relatively small and easy to maintain, the US Army issued a request for proposals in 1953, and selected Bell’s Model 204 design in 1955.  Initially designated the HU-1, from which its nickname stems, the UH-1A entered service in 1960. A requirement for more power led quickly to the UH-1B, and the need for self-protection to the UH-1C gunship variant to fly escort.

While the Army considered the Huey a great success, they asked for an increase in troop seating. Bell responded by stretching the Huey’s body, fitting four more seats and creating the UH-1D, known by Bell as the Model 205. An engine upgrade resulted in the UH-1H, which would be the most-produced version. Later models added a second engine, and the US Marine Corps UH-1Y, still in active service today, replaced the signature two-blade rotor with a four-blade one.

The Huey is, of course, inextricably linked with the Vietnam War. Over 7,000 Hueys flew for the US Army in Vietnam, joined by hundreds of others flown by the US Air Force and Navy, and the Royal Australian Army, Air Force, and Navy. More than 3,300 Army UH-1s were destroyed, and almost 2,200 Army air crew perished. However, the bravery of the Huey crews meant that tens of thousands of injured soldiers survived wounds that would have meant certain death in earlier conflicts, thousands were evacuated from situations that would otherwise have been hopeless, and thousands received supplies that enabled them to emerge victorious in battles they would otherwise have lost. Its impact on the Vietnam War is simply incalculable, and its effect on the conduct of modern mobile warfare is immense.

While the US Army recently retired its last UH-1s after over 50 years of service, the type continues in service with over 35 nations, of more than fifty who have flown the type. Notably, at least a dozen continue to be flown by Vietnam, who captured or recovered large numbers during and after the Vietnam War. UH-1s have seen recent service with the Drug Enforcement Agency, who used them in eradicating heroin poppy crops in Afghanistan, and hundreds of former military Hueys fly today in civilian hands, being particularly popular as construction and logging helicopters.

In addition to getting to visit and sit in the Museum’s UH-1H, lucky visitors may see both old and modern Hueys in flight at the Kalaeloa Airport: the Marines occasionally operate their current UH-1Ys in the area, and there are a number of civilian UH-1s and Model 205s which visit.

For more information on the Huey, start with these sites:

The LTV A-7 Corsair II 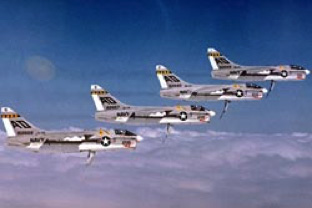 The LTV A-7 Corsair II was one of the most successful military aircraft of modern times and probably the greatest bargain in weapon system procurement history.  The taxpayer certainly got his money’s worth and the naval aviator was provided an efficient vehicle for operational training and a superior weapon for combat.  A-7A’s cost a little over one million dollars each and delivered weapons with an accuracy unheard of in their day, while achieving the lowest loss rate of any aircraft in the Vietnam war.  Later A-7 models went on to pioneer sophisticated avionics systems which are the norm today.  The head-up display, the central navigation-weapon delivery computer and many other avionics innovations were first used on the A-7. 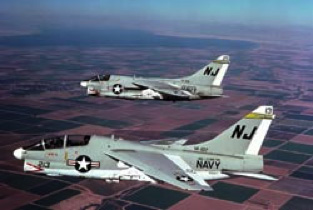 The life of the A-7 covers several periods.  The A-7A, B and C were basically the same airplane with engine updates and other system modifications related to the engine.  The A-7D and A-7E were giant steps into the future, with sophisticated avionics suites which set the pattern for all future weapon delivery and navigation systems. The next phase was a series of two-place designs, encompassing the U.S. Navy TA-7C, U.S. Air Force A-7K, Greek TA-7H and Portuguese TA-7P.  Then came the low-altitude night attack (LANA) version of the A-7D and A-7K.  Finally, there came a major propulsion upgrade which took the A-7 into the supersonic performance range as the U.S. Air Force YA-7F.  The A-7A first flew in September 1965,and the first operational U.S. Navy squadron airplane was delivered in October 1966.  An incredible first-flight-to-first-delivery record!  The Navy entered combat with the A-7A in December 1967.  The U.S. Navy flew its final A-7E combat missions during the Gulf War in 1990, and the A-7D’s and A-7K’s were retired from active service in 1993, with final operations still being conducted by Air National Guard units.  The A-7, in all of its variants, had a remarkable record of success in flight operations and in combat. A truly successful airplane. 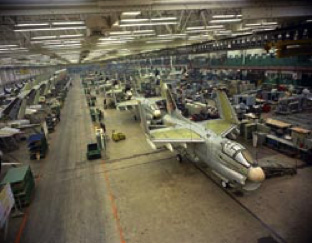 A total of 1,545 airframes were manufactured, and of these 113 were remanufactured to produce additional models of the airplane.  This included 60 TA-7C’s, 44 A-7B’s, 6 TA-7P’s and 2 YA-7F’s.  Though seldom publicized, it racked up accomplishments of startling proportions.  In over 5 million flight hours between 1968 and 1991, U.S. Air Force and U.S. Navy A-7’s were the U.S. military’s  most cost-effective aerial weapon.  It was noted for  capability to carry very heavy weapon loads (up to 20,000 pounds), ultra low maintenance requirements (9 to 11 maintenance man hours per flight hour), superior weapon delivery accuracy (bombing within 50 meters of friendly troops), long range ( up to 4,250 nautical miles), low loss rate in combat (0.04%), and very low accident rate.  It was also an airplane that was easy to fly and that was well liked by the pilots. 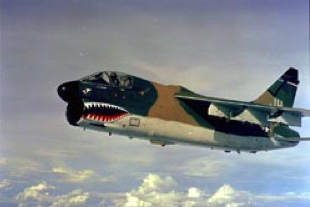 Unfortunately, DOD’s desire for multi-role supersonic fighter/attack aircraft with stealth capabilities spelled doom for the A-7 and for low-cost combat aircraft in general.  The day of  the single-purpose combat aircraft that cost under $5M gave way to the $50M fighter/attack machine, at least in the United States.  However, this trusty workhorse will be around for many years as an international warplane because of the incredible punch it can deliver at a very low price.  The A-7’s in storage at Davis-Monthan Air Force Base in Tucson, Arizona are fast disappearing and soon will be no more.  It is sad sight to see such a marvelous piece of machinery, still fully capable, regulated to the scrap heap.  However, thanks to our program support to our allies around the globe, A-7’s are still in service in Portugal, Greece, and Thailand.  Like the DC-3, the A-7 is likely to be around many decades in the future.

Photographs and article reprinted from the Vought Heritage site.

For more information on the A-7 Corsair II, start with these sites: