The Vietnam Era Navy pilots that I knew and who shared their stories with me all loved their Scooters. 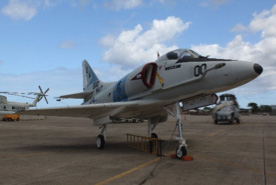 The Douglas A-4 Skyhawk is a carrier-capable light attack aircraft, and one of the most effective and longest-serving aircraft in the world.  Its adoring pilots have given it dozens of nicknames in its time: Heinemann’s Hotrod, the Bantam Bomber, and Scooter, among many others.

The Skyhawk, originally designated the A4D, was designed to replace the storied-but-slow A-1 Skyraider as the Navy’s light attack bomber.  The project was assigned to famous Douglas designer Ed Heinemann, and what emerged from his drawing boards was an aircraft for the ages: small to save room aboard cramped carriers, capable of carrying more bombs than a WWII B-17 Flying Fortress, nimble enough to dogfight with anything in the sky, and able to bring its pilots home despite ferocious damage.

The A-4 came of age during the Vietnam War, where it carried both Navy and Marine pilots into the dangerous skies of Southeast Asia.  362 Skyhawks would be lost to all causes during the conflict, including that of Everett Alvarez Jr., the first US aviator to become a POW, and those of two aviators who would later rise to national fame: Senator John McCain of Arizona, a former presidential candidate, and Admiral James Stockdale, Medal of Honor recipient and former vice-presidential candidate.  Skyhawks also flew into combat for Israel in several conflicts, for Argentina in the Falklands War, and for Kuwait during the Iraqi invasion and subsequent Operation Desert Storm.

Perhaps more famous to most visitors will be two very public roles the Skyhawk played.  First, it was the chosen mount of the US Navy’s Blue Angels aerial demonstration team for almost twelve years, until being replaced by the F/A-18 Hornet in 1986.  Second, they jockeyed for attention and “kills” as the aircraft flown by the instructor pilots in the 1986 Paramount film Top Gun.  Indeed, it was in this real-life adversarial training role that the Skyhawk would conclude its US service after almost 50 years in 2003.

Despite being designed in the early 1950s, the Skyhawk was in production for twenty-five years – even longer than the F-4 Phantom II. 2,960 examples were built, eventually serving with the militaries of eleven nations. In addition to a number of civilian-owned examples, two of those nations, Argentina and Brazil, continue to fly it to this day. Incredibly, Brazil looks to shortly be flying the type from an aircraft carrier once again, more than sixty years after the type’s first flight!

The A-4E, the variant displayed by the Museum, featured a more powerful engine than previous versions, an additional two weapons stations (for a total of five), and vastly improved electronics. Its increased power and strengthened airframe were major factors in its longevity in the notoriously punishing adversarial role.

For more information on the Douglas A-4E Skyhawk, start with these sites: 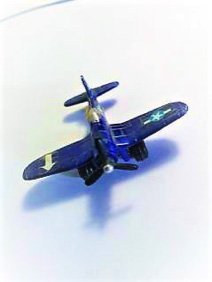 The photo to the right is of a toy Corsair given to me by a dear friend for inspiration as I wrote Dead Legend.

The Voight F4-U Corsair was one of the great workhorses of WWII and the Korean War. Their distinctive gull-wing profile was largely because their wings could be folded to allow for more aircraft to be ready on deck.

Originally designed as a carrier-based fighter, the Corsair’s difficult handling and landing characteristics caused the Navy to rely on the Grumman Hellcat instead. The Marine Corps benefited from this policy change, and its land-based units eagerly adopted the “Bent-wing Bird.” The famous Jolly Rogers, the Navy’s VF-17, also flew the Corsair during its tour in the Solomons. Late in the war, as the handling problems were resolved, both Marine and Navy pilots operated F4U’s from carrier decks.

But its speed, firepower, maneuverability, and ruggedness cause many to rate it with the Mustang as the best fighter plane of World War Two.

The Corsair appeared to be a superb fighting machine, but it was overengineered and thus hard to maintain. At the start of a typical day’s ops, only about half of our full complement was safe to fly. By “secure,” half of those could be expected to be “down.”

The 2,800-cubic-inch engine was a monster to fire up after it had sat in subfreezing weather overnight. First, it took two strong men pulling on a prop blade to slowly accomplish the minimum revolutions needed to clear the lower cylinders of oil so the start-up could be accomplished in safety. Next, the engine had to be primed with raw gasoline. This touchy enterprise had to stop short of flooding and thus drowning the spark plugs and evade the obvious fire hazard while getting enough vaporized fuel into the cylinders to get the engine to cough to life. Some genius had equipped the Corsair with a shotgun starter in lieu of the heavy electric starter. When all was in readiness, the shotgun shell was fired. Sometimes it went bang and turned the prop through three or more revolutions. Mostly, however, it just went poof and the prop just twitched. Four abortive tries generally overheated the starter, and that resulted in a fifteen-minute stand-down for cooling. So much for geniuses.

Each of fourteen cowl flaps had its own baby hydraulic cylinder to open and close it. These tended to leak. In addition, until the maintenance crews became expert, the big radial engine tended to throw a lot of oil. The combination rapidly coated the windshield and seriously decreased the airplane’s inherently limited forward visibility. We all became expert at quickly locating rain showers through which we could fly in order to wash away the oil.

The landing flaps had a protective device to prevent extension at airspeeds high enough to cause over-stressing. This was a dandy feature except that the flaps could and often did retract fully and without warning during the final stages of a landing approach. Of course, this resulted in a horrendous loss of lift and a rapid sinking. The pilot, ever alert for such mishaps, had to slam on full power to evade disaster. After too many narrow escapes, we got the “flap blowup” removed, it being our decision to risk tearing off a flap as against losing lift in this terrifying, dangerous manner. To my knowledge, no one ever did tear off a flap.

The Corsair’s storage battery, which was located in the cockpit, had an unhealthy habit of boiling over. In one case, a battery exploded while the airplane was in flight. We later determined that it had been excessively overcharged, but the incident gave us one more in a long line of potential life-threatening problems to bear in mind while we were trying to fly—and eventually, fight—our irascible Hogs.

quoted from The Jolly Rogers, by Tom Blackburn and Eric Hammel